For the publication, which will be available at the Biennale and distributed by Verlag der Buchhandlung Walther und Franz König, Jakob Lena Knebl and Ashley Hans Scheirl have conceived a glossy magazine entitled Softmachine. Adopting various retro-styles from the history of graphic design, the magazine as a medium offers the opportunity to contextualise the complex artistic approaches and, at the same time, to share the stage with designers, theoreticians, sponsors, and production partners. In addition to texts, it will also feature interviews on current discourses and photo spreads that afford insight into the dazzling and profound intellectual worlds of Jakob Lena Knebl and Ashley Hans Scheirl and their inspirations.

You can buy the magazine here.

The theoretical and spatial-artistic references within the Soft Machine are presented in detail in the introduction by art historian SUSANNE NEUBURGER. In it, she also references the pavilion’s architecture: ‘The layout of the pavilion provides symmetry, if not a mirror image. This will play a role in the two adjoining rooms and then when the duo
repeatedly refers to each other in poses or accessories and separates again just as the main rooms are divided: Knebl on the right, Scheirl on the left.’

‘My art is “trans”: transgender, transgenre, transmedium,’ says Ashley Hans Scheirl. ‘Painting is at the centre; at the same time, it’s about the dynamics between the media.’ For Scheirl, art is a means of change. ‘It’s about the search for identity and the tinkering with oneself.’ GUILHERME PIRES MATA`S contribution deals with how Scheirl’s installation could be read as ‘an allegory of an obscene libido whose imaginary is transformed into an instrument of critique of political and economic obscenity.’

Knebl’s photographs in which the artist seems to metamorphose into a living piece of Chesterfield furniture or a Mondrian canvas exude a kind of transformation magic that helps penetrate the object-fetishist core of our late capitalist culture. The image of furniture becoming a figure was also the radical basic idea behind HUSSEIN CHALAYAN`S
legendary clothing series Afterwords (2000), inspired by stories of flight and migration, which probably became the most famous work of the British-Cypriot couturier and artist. Chalayan had designed furniture covers that turned into clothes and furniture that could be transformed into suitcases. ‘Because I see clothing and the body and fashion
in the same way as an artist might look at their medium,’ Chalayan says in an interview with MONICA TITTON in the magazine.

With Soft Machine, Scheirl and Knebl selectively evoke the aesthetics and indeed the democratic freedom spirit of the 1970s, the decade whose emancipatory cultural legacy is now being appreciated in a new way. The Centre Pompidou in Paris, opened in 1977, which Knebl cites in her work, may serve as an example of the solidity of these ideas: The technical functions of the building are turned inside out in a revolutionary way that is as transparent as it is visible from afar. ‘Knebl cites the famous building’, writes THOMAS D TRUMMER , director of Kunsthaus Bregenz and curator of its 2020/21 exhibition with the two artists, in his text, ‘with the triple pipe but also the interior design of these awakening years, the intense colours and unusual contrasts, psychedelic effects and the horror vacui of pop.’

The past serves Knebl and Scheirl as an instrument to aim at the present. The Soft Machine, as the author and curator ATTILIA FATTORI FRANCINI sees it in her text, ‘takes the counterculture experience as an inspirational moment of protest, liberation and mass distribution of radical ideas’ – like a programme installed on its hard drive.
Today, the question of emancipation through art, society and subversion poses itself quite differently again.

‘We need utopian places where we feel safe(r), seen and happy,’ writes Lisa Holzinger of Sisters, the Viennese queer-feminist art and culture association, who filled in MARKUS PIRES MATA`S Softmachine Questionnaire along with Tony Renaissance, Enesi M. and Voiler.

By disclosing its artistic source code, the Soft Machine also invites participation. For ‘the knowledge of these artistic codes, knowing the alphabet of art in the so-called digital age’, as GERALD BAST, principal of the University of Applied Arts Vienna, where Jakob Lena Knebl is a professor, writes in his text, ‘is at least as important as the knowledge of
the function of codes used to produce algorithms, because only the knowledge of the existence and the function of such codes allows social participation.’ The irony, humour and serious play in the art of Jakob Lena Knebl and Ashley Hans Scheirl keep the Soft Machine on course. They act as big parentheses to bring together things that at first seem irreconcilable in an aesthetic of contradictions in a way that is both inviting and surprising.

The email exchange with the historian of religion and ‘amateur flower gardener with a creative urge and revolutionary zeal’, BARBARA URBANIC, also printed in the magazine, is about the political element of gardening. In today’s era of climate change, gardens become revolutionary plots – a huge inspiration for the two artists. Another formal source of
inspiration: camouflage. As a special case of floating patterns in industry, military, fashion, and activism, this method is explored by DANIEL KALT, author and editor at the Austrian daily newspaper Die Presse, in his contribution.

The publication, which represents a mix of glossy and counterculture magazine, acts as an expansion of the pavilion. As Jakob Lena Knebl and Ashley Hans Scheirl put it, ‘It was important for us to work with a format that allowed us to incorporate other voices, our broader environment, and our current interests.’ 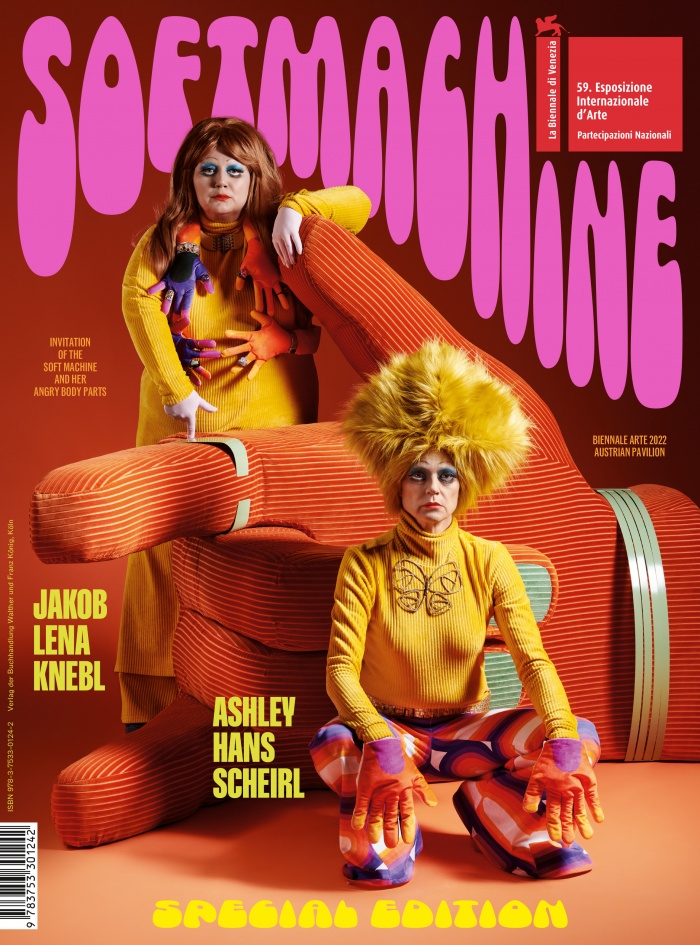 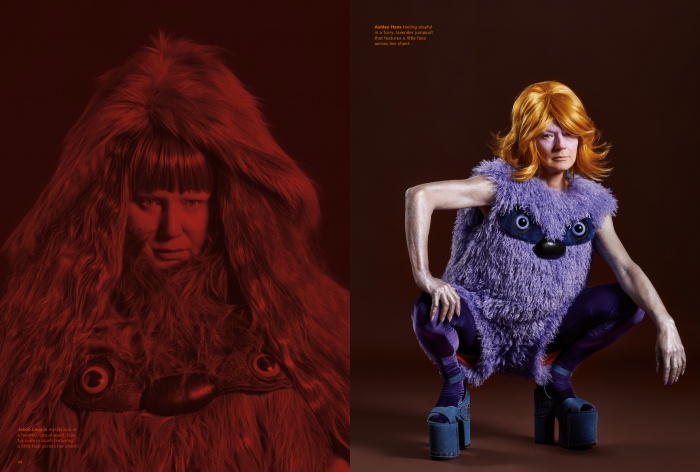 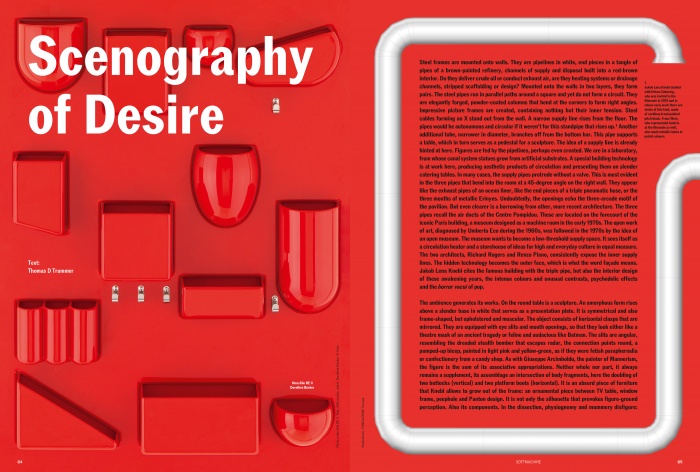 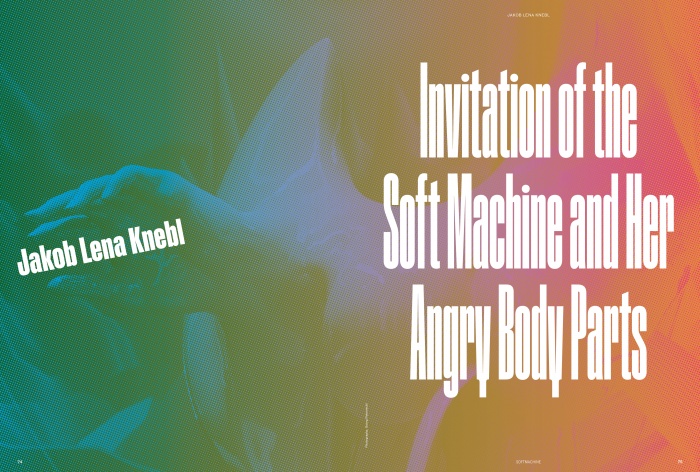 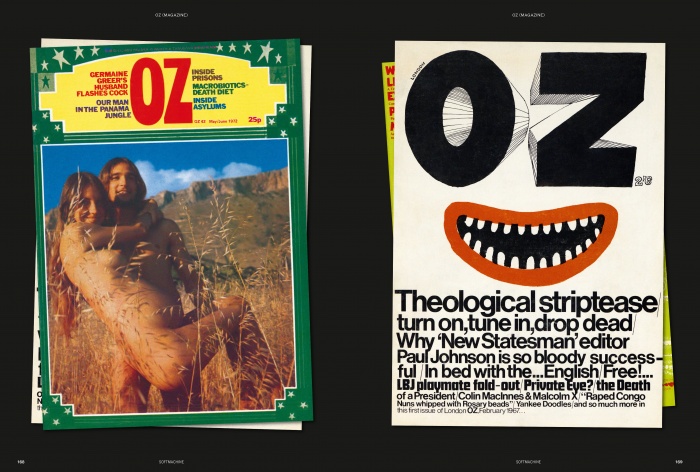 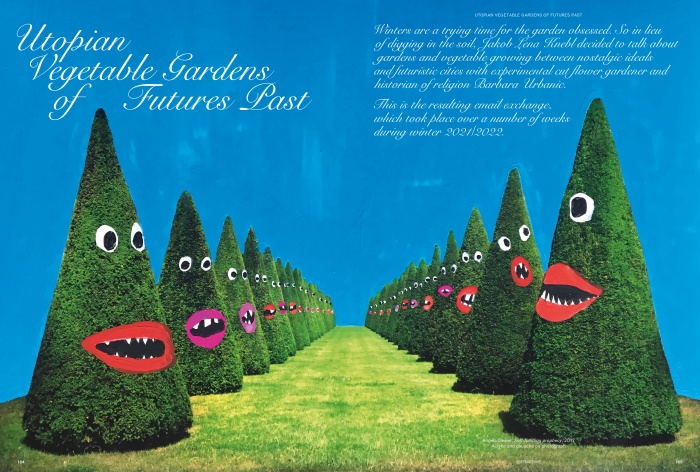